come hang out with me…?

My friend, Sherri Lynn Wood, is offering a series of workshops on up-cycling fabrics into quilts in improvisational ways. I’ll be the guest speaker in her Pocket Workshop on Saturday, March 13. She has a sliding scale for registration (from “pay-it-forward” to “standard” to “equity”) so that everyone has a chance to join in. Register here.

I’ll be talking about my commitment to sustainable fabric practices and quilts that fall into that category. The photo above is one of my first upcycling experiences–from 2008. 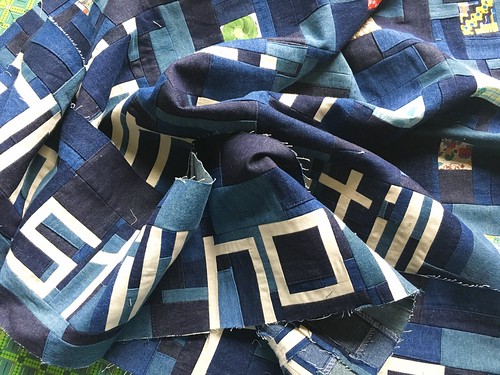 And then I’ll also be offering my class in improvisational lettering at the Madeline Island School of the Arts during July 18-22, 2022. We’ll learn how to make letters and words and design layouts and then express ourselves openly on our quilts. Register here.

Looking back to move forward.

It’s been a doozy of a year. “Unprecedented” and “pivot” are now my least favorite words, but I have re-embraced “hope.” Hope and change.

[This is the only patchwork I’ve managed in a year, but all I can think about is getting back to the grind. Lots of ideas and so little time!] 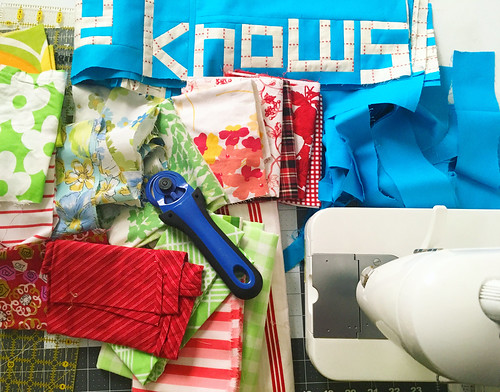 We’ve endured a year of the weird now, huh?

Think back. How did you know things were about to get real? I’d been eyeing this thing from the beginning, reading everything in the news and asking all my friends who travel abroad regularly. Friends who’d been home for the holidays in China really diminished it all and told me it was dumb to worry. But as the virus moved into Europe and felled the unprepared, it started to sound like we needed to make plans. And so I did, in the small ways that a single person can prepare oneself for something of global impact.

As a transplanted Floridian, I has some sense of what to do. So in early March, I stocked up as if for a hurricane–and the 2-week recovery that usually follows: full pantry, household goods, etc. The grocery store was quite normal; lock-down was still a couple weeks away. I’ll forever be glad that I’d thought ahead. 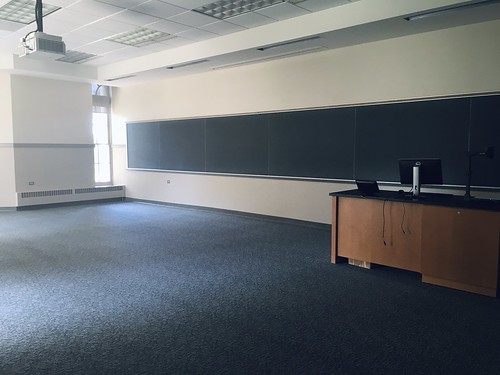 My jobby-job was top of mind also, but it didn’t occur to me that our campus would shut down for the next nine months and that classes would all be online until we opened again just 3 weeks ago. But I had strategized about a few important things like hiring from a national pool when travel seemed to be the root of the problem. And then later, morale and safety were my deepest concerns. We have succeeded despite the obstacles and seem to be coming through it strong enough to manage the austerity of the long-term recovery. 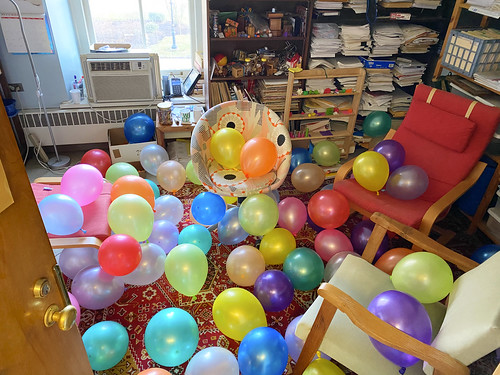 In early March 2020 I’d stuffed balloons in a friend’s office to celebrate his 50th birthday. Ten months later I turned 50 myself in solitude that was both extraordinarily blissful and deeply painful. Coming shortly after the insurrection, I had little energy for much else and so I didn’t tell anyone it was my birthday. Apart from calls and texts from aunts and cousins, it was just another day, although in my heart it was not. When the world opens again, it should be just a constant birthday party for a long, long time to make up for all this. Every day is an excuse for CAKE now. 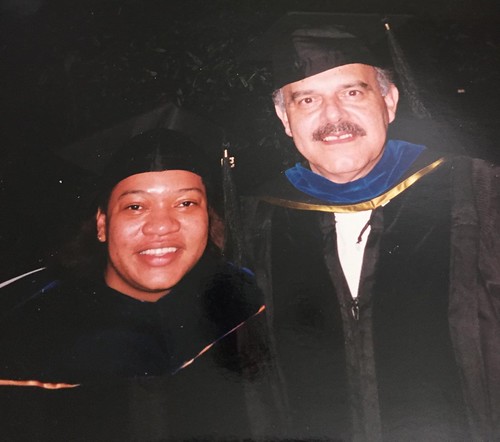 Of course, there was loss here. In particular, my doctoral advisor–my mathematical father, and a second father at that–passed away in the summer. The grief keeps circling back for another round-house kick in the teeth. It won’t quite feel real for a long time. 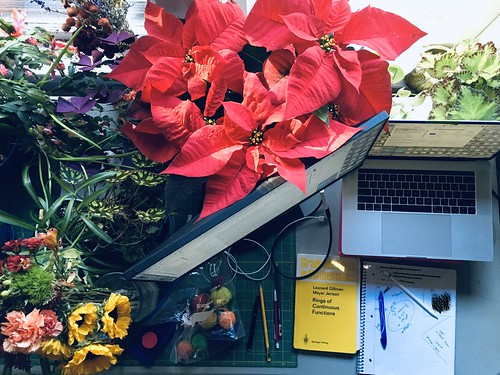 I still work at the table in my kitchen all day, broadcasting mathematics and policy and stuff to the world next to my toaster oven, while staring at the squirrels in the back yard. [Well, right now the back yard is an icy mess.]

Late at night I catch up on uploads and organization and emails with two laptops in bed. 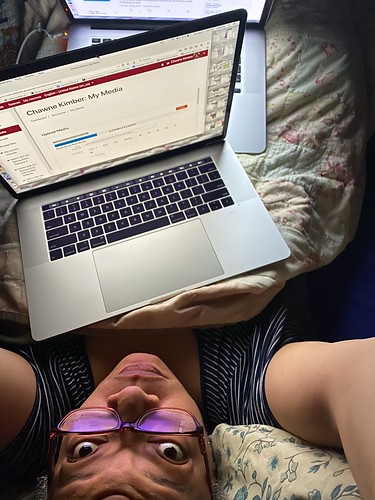 I doze off like this. And then I wake up to lather, rinse,…repeat.

Thanks for your lovely and kind comments about my recent quilt finish. It’s always nice to hear from you.

Recently I participated in this panel discussion about quilts and writing with a journalist, a novelist, and a poet. It was kinda fun.

And if you’re interested in learning about textiles and social justice, historically speaking, join me through Tatter Blue Library on July 25 in the afternoon. Information and tickets are available here. Cost ranges from free to whatever you like and proceeds go to BLM, SJSA, and a local shelter for women and children.

At RealJob, July 1, 2020 is the first day of a new month, a new fiscal year, and a new academic year. It’s usually about the time that summer break starts to feel like it’s dwindling away, but this year we hit that point weeks ago; we are starting much earlier and risking our lives…but I digress. 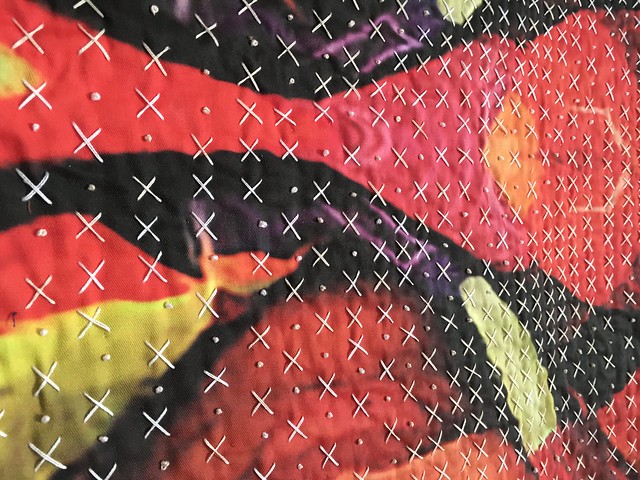 On this day I begin earning fewer dollars for my efforts…another COVID-19 digression…same job, fewer dollars. But I begin the same job with a new title (an endowed chair). To me the title is a surprising kindness and an ego boost that won’t go to my head. Eyes on the prize, friends. We still have lots to learn and ever more to achieve. 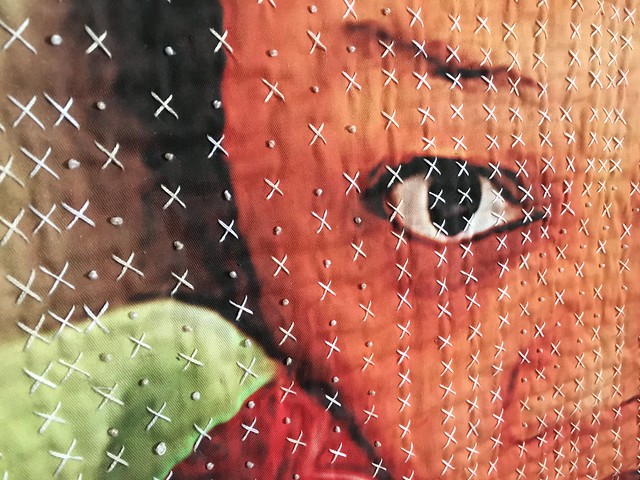 And a new year as a quilter. Here’s a new quilt in a new series (not sure when I’ll get the rest of the series going though). And the ideas I had in mind a year ago when I proposed making it for a museum exhibition:

A patchwork of a portrait of myself as a quilter, this is a reflection on a black interloper into the quilt world, which is a space policed by white women who often act as gatekeepers and
try to keep me out.

I was, ahem, in a different head-space then, although I still agree with the sentiments.

But I find myself worthier now. 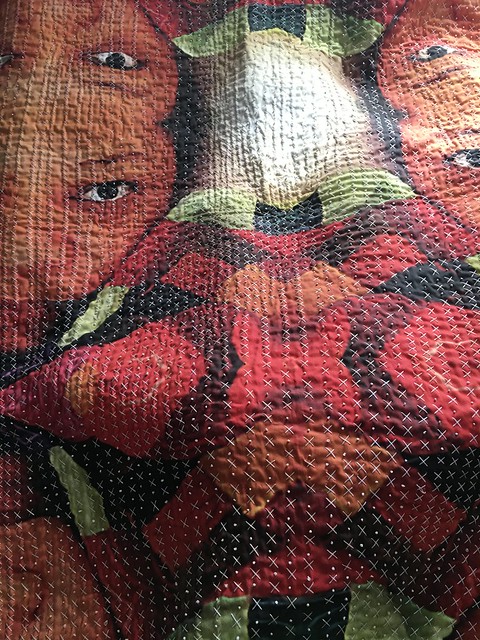 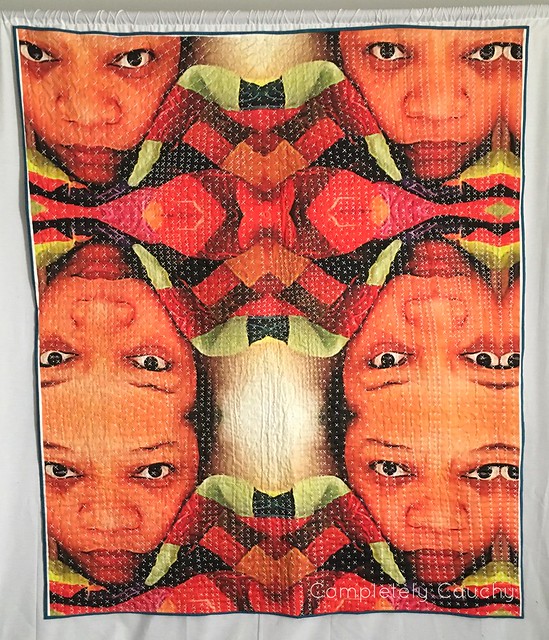