A little navel-gazing on the last day of the year…

So I was giving this talk in Chicago about my work with lots of photos and a little trunk-ish show-and-tell too. [No photo truly substitutes for seeing artwork for real.] In the Q&A and the milling conversations afterwards, someone remarked that my work doesn’t have a single style; that is, they’re all different. And that’s true, though not something I’d thought to ruminate on.

Well, I have thought about working in a series, which I guess I’ve done a few times. [Log cabins as respresentations of place and the self-portraits and the whole social justice thread…] But I think I’ve maintained my practice of traditional-ish work and maybe that’s a series of its own–it builds new skillz and techniques while also experimenting with all sorts of design factors. And that’s alongside the works that are motivated by social ideas. In these I find the technique or style that seems to suit the statement attempted.

And now I’m trying some slow poetry…cutting out words and then assembling by hand, slowly building some stream of consciousness statements in language, color, form and function. The start of a new series…slowly.

Thanks for listening, friends! Here are some photos and some data. xoxo 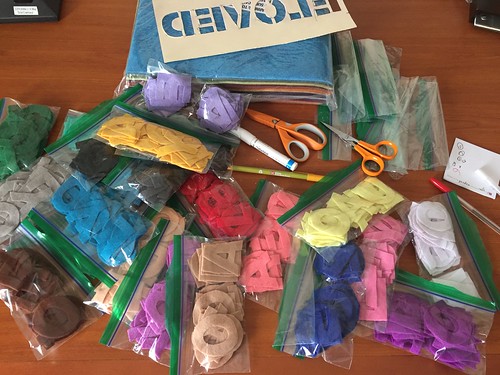 Stitching in the airport after Xmas: 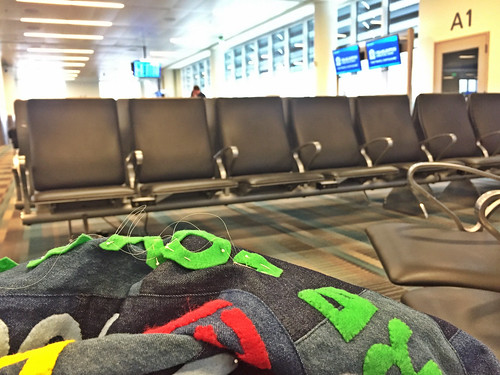 Project FAQ without the Qs: 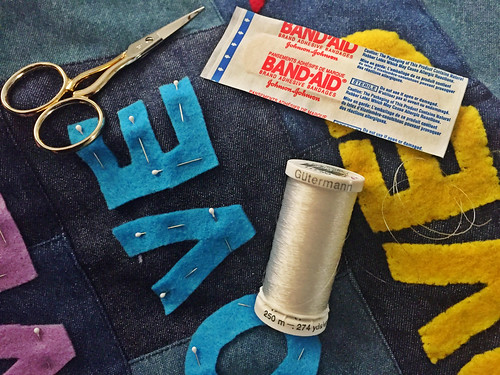 Band-aid=thimble. Yes, denim. It’s serged and top-stitched commercially. Felt. Appliqué pins and a cheap magnetic tool case to catch them. Monofilament thread for invisibility, blending with any color of felt. And they are a buncha words; I’ll show ya later. “Practice” doesn’t mean “learning for the first time.” It’s about honing skillz and is something one does even decades after initially learning; it’s all in the interest of good craftsmanship. Re-watching/binging Psych. That is all.