It’s inordinately difficult to know what to say today, one week after George Floyd was killed in broad daylight in Minneapolis, sparking off a week of peaceful protests (in 111 cities) some of which were hijacked and turned into riots by extremists. Oh, and let’s not forget that this is all amid the COVID-19 global pandemic. 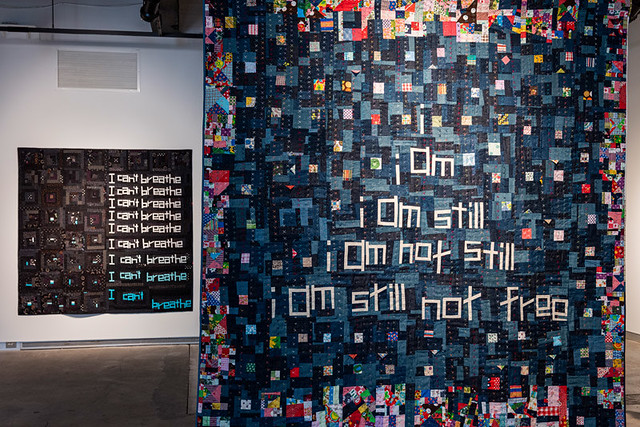 One can get disproportionately enrapt with just one of the many issues at hand and come away with a shallow and/or distorted understanding of what, exactly, is happening here and now. We all, myself included, need to take some slow breaths (if we can) and slow down to focus. There’s far too much happening to us at once.

Do not ask me what to do.

Consider joining me for a discussion of textiles and social justice, hosted by the Vermont MQG; admission is $10 and once my fee is paid, all further proceeds are being donated to the Social Justice Sewing Academy, Black Lives Matter Vermont, and Third Street Alliance (a shelter in Easton, PA). Info and registration here.

In this moment of great uncertainty in the world, this is my quilt that best reflects my mood on National Quilt Day.

Hoping all the hopes that you and yours stay happy and healthy during these tough times.

Hope can be half-full. 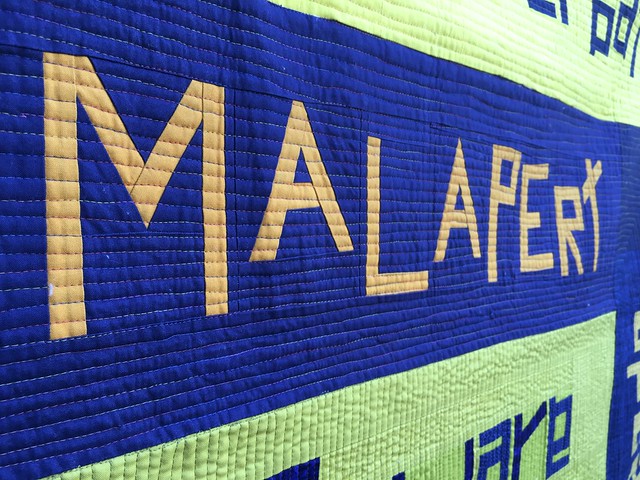 Well, that sentence kind of buries much of the reason I’m popping back up here after such a long time away. But it’s a good starting point.

It was also a very good year.

Belief systems that sometimes explain happenstance via some sense of universal balance resonate with me since I seem to straddle a pendulum, sometimes holding on for dear life and sometimes reveling in the sheer fun of a wild ride. Life is a struggle at times, but it’s also been a charmed one so far.

Here are some examples.

At RealJob in a meeting of a group purportedly devoted to promoting equity and inclusion I was sternly reminded that ALL LIVES MATTER in an effort to ensure the exclusion of folks of color from all future discussions. Yes, indeed. And no one spoke up to contradict this proclamation. Silence is incredibly loud. That I’ve remained quiet about this despite knowing that it is the clearest cue to extricate myself from this group has been a big mistake on my part. At the same time, it has been a severe injustice on the part of my colleagues who imagine themselves to be allies and take victory laps each time they find themselves to be woke. [Why am I still here? This question paralyzes me every time a student asks.]

Meanwhile, in the quilt world–the space that was my (imperfect) escape zone–I was deliberately erased from its history due to the political nature of my artwork. Because the offending organization has far more to work on than just apologizing for this slight, I rendered myself virtually invisible in the incident. There was a cryptic apology letter sent to the at-large international community about it, but few knew it referred to an incident involving me. It was an episode that is dwarfed by my day-to-day struggles, but it was a sharp blow nonetheless. [In this case, I did declare to the organization that we’re on a break and will reassess our relationship in the future.] 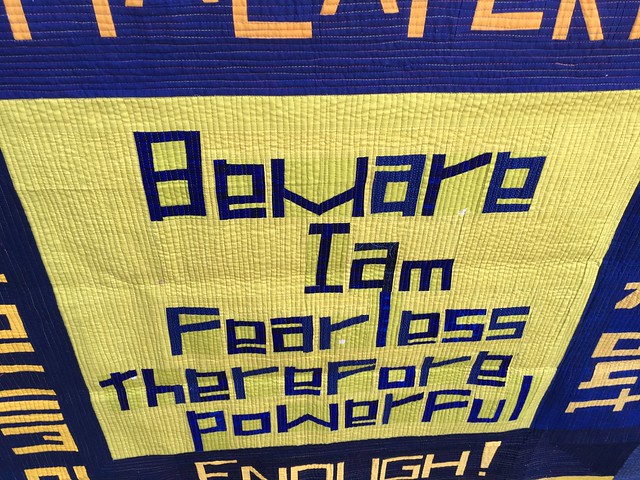 Only thrice have I spoken of this quilt brouhaha publicly and even then only when directly questioned about it. It takes a bit of discipline to both: (1) maintain some perspective that this wasn’t about just me and dedicate my energy to improving life for all and (2) not lash out every time folks asked me why I wasn’t attending the annual gathering of this organization last month. To be sure, even some of those who knew about it had forgotten. Many of them asked why I wasn’t over it. Of course, I don’t matter.

But there is a group of self-styled Rude Quilters, students from my summer retreat in Maine, who gathered to vent their own frustrations in a world that systematically works to silence women. And to express their anger with censorship done in the name of propriety–that is, they wanted to respond to those who want to keep politics and artistic personal expressions out of the quilt world. 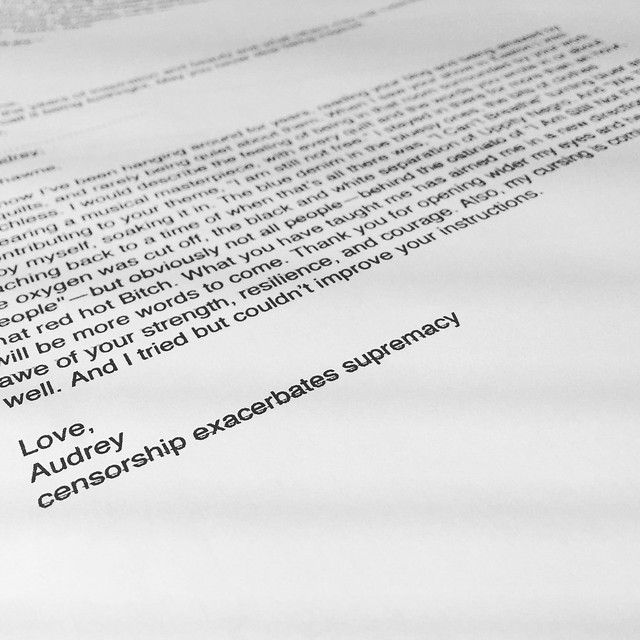 And then the quilt showed up on my doorstep last weekend. No one has ever given me a (non-mini) quilt before. Even just the note tucked inside made me cry for a long, long while.

And I am still speechless. 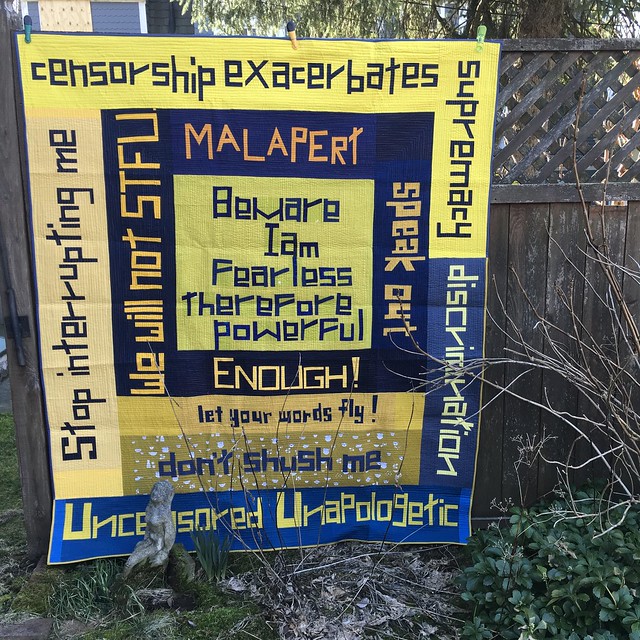 Luckily these very kind and talented ladies are saying it for me right now.